I know that here in the South-West, there's still a fairly decent run of fishing ahead of me this season, but I can't help but cast my mind forward to next season. I've learnt so much this year and am still absorbing information at a rapid rate of knots, I just don't have enough time left this year to deviate from what I already know will catch me fish.

There are a few things I'm looking forward to trying out next year. Driftbait's being one of them. I've had a fair bit of success using Softbaits drifted in a local Estuary mouth and know that sinking plugs work also, so these Drifbait's seem the natural lure of choice. I was put onto these by a Forum member called Dave Irving, who has had a good deal of success using them in Estuary marks that he fishes. As far as I can tell, they're ultra popular in Japan and catching some BIG Bass over there(picture below). 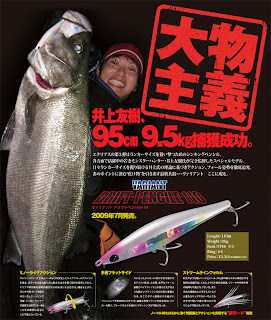 As far as I'm aware, these slow-sink Lures are import only at the moment. Although I'm guessing it won't be long before one of the specialist Lure shops stock a few.

The other thing that is playing on my mind is rod choice for next season. I just can't help feeling that most of us fish too heavy for our Bass. I'm leaning more and more to rods rated up to around 21g. I don't exactly fish with a heavy rod, but considering that most of the Bass I catch are 1.5 - 3lb, surely I should be fishing with a set-up geared toward getting the most from fish of that size, but capable of handling bigger specimens when they come along. I was originally leaning toward a Tenryu Injection, but after much trawling of Japanese sites, have come to realise that there are so many rods of just as good quality, for at least £100 less.

The meet on Sunday was a success, with a turnout of 13 that proved to be a lucky number as all but one person caught Bass. Stevie managed 5, with the biggest of the day going to one of the Falmouth lads, at a shade over 3lb. Was an excellent day out, conditions were near perfect and I'm looking forward to the next meet already!
Posted by Matt Newcombe at 12:05